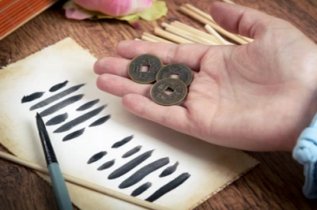 One of the oldest and most flexible of divinatory methods is also the most fascinating. The Chinese Book of Change, the I Ching, has been respected as an oracle for at least 3000 years. Its different from other oracle books as it does not regard the past, present and future as fixed; instead it treats time and fate as dynamic and flowing, never the same from one moment to the next.The advice obtained from the I Ching is therefore one of possibilities; if you act in such as way, it is likely to result in certain outcomes, act in a different way and you'll achieve a different response etc. The I Ching is said to gauge the flow of Yin and Yang energies and offers the seeker an appropriate course of future action based on the interplay of positive and negative forces that shape our destinies. Although traditionally a heap of fifty yarrow sticks is used, we prefer the use of ancient Chinese coins as they are easier to obtain, and certainly easier to use.

The coins are thrown six times, and each combination of the coins creates either a Yin and Yang line. These lines (created from the bottom up) then form a hexagram, which has a specific meaning/answer in the Book of Changes (I Ching.) When a moving line is created, you get two answers to your question, the first, a specific answer to the question now asked, and, by following a proposed course of action, your second answer. We particularly like the I Ching as a method of divination simply because of this specificness. Oracles such as the Tarot, give general 'direction of travel' prophecies, whereas the I Ching will give you a specific answer to a specific question.

In modern times the noted psychoanalyst Carl Jung and the translator of Buddhist and Taoist texts, John Blofeld, have both expressed their belief that the I Ching seems to work infallibly. This free Book of Changes program download allows you to use the Book of Changes online without coins or yarrow sticks. Simply download the program, run it, ask your question, 'toss' the coins six times to form your hexagram (whilst concentrating on your specific question) and an answer will be given. Use the I Ching Book of Changes to:

The images and practical advice of the Chinese Book of Changes let you participate in change instead of being its victim. The Book of Changes acts like a wise old friend or helping spirit. As Confucius wrote in 481BCE, when he was already nearly 70 years old, "If some years were added to my life, I would give 50 to the study of the I Ching, and might them escape falling into great error." Download here.